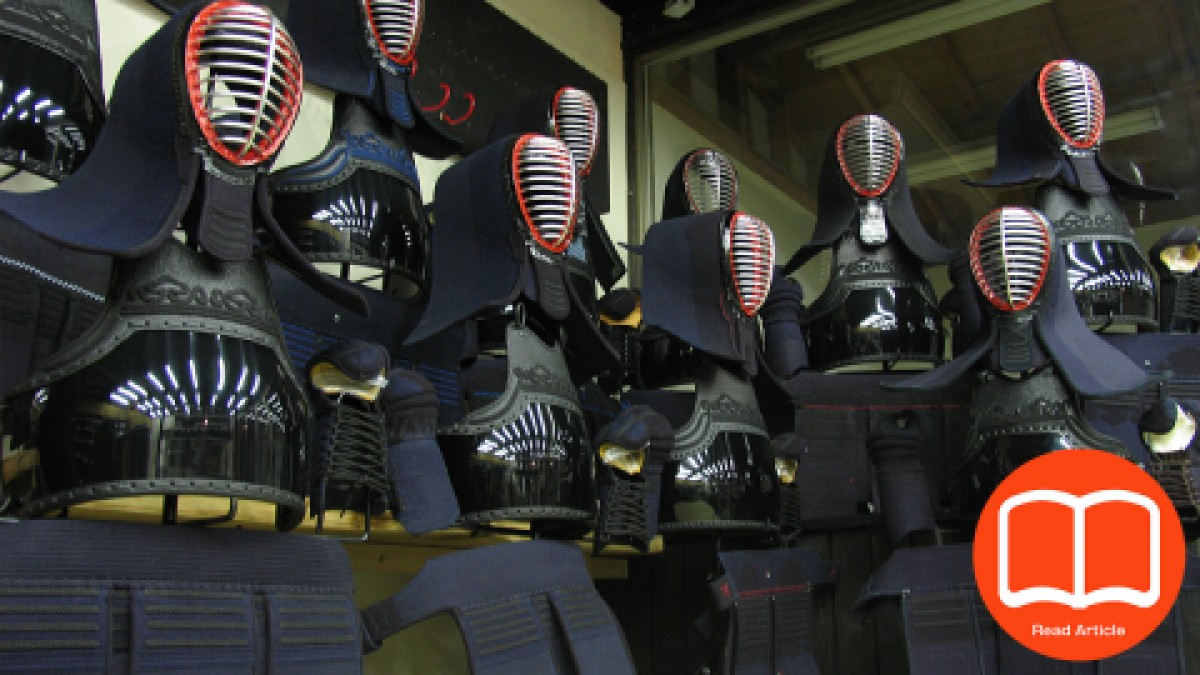 Kendo protective gears are composed of Men, Dou, Kote, and Tare. Each has a respective meaning, structure, and design. I will be introducing the basics.

Men is one of the protective gear that symbolizes Kendo. This is used to protect your head and neck from the opponent’s attacks. On a large scale, it is composed of four parts: Mengane, Uchiwa, Mentare, and Tsukidare.

Mengane
This is a metal protector that covers the whole face. To secure the sight while protecting the face, it is in the grid pattern. During the Edo period, bamboo was used, then iron, but as it was changed to light weight. Gradually, it has changed to alloys like Duralumin or Titanium.

Monomi
This is what we called the part between the gaps of Mengane, the part of eyes. This is slightly wider than other gaps, so this doesn’t obstruct the view. When choosing the right Men, the position of Monomi is important.

Uchiwa
This is the part that protects the face contour. Uchiwa is also the part where we insert the face, so the right size should be selected, and it should be equipped correctly.

Mendare
This is the part below Uchiwa, towards the shoulders. During practice, when hitting each other, there are times that Mendare is hit as a wrong target, so it is necessary to prepare a Mendare that is lengthy enough to protect the shoulders.

Tsukidare
This is the part where the neck is protected against the opponent’s neck stabbing. The material used is cowhide.

Origin of Men
Men, is known to be first made by Shirosaemon Kunisato Naganuma. This protective gear, which includes Men and Kote, was continuously developed by Mitsunori Yamada, the father of Naganuma, not to hurt each other even during stroke practices. And, the final version was made by Naganuma.

Can I wear eyeglasses?
You are allowed to wear Men while wearing eyeglasses. Compared to other sports, Mengane gives protection, so there is less possibility of the lens to break, but there is still a need to be careful of damages. To avoid the risks, you can use contact lenses or exclusive eyeglasses for kendo.

How to measure the size of Men
There are few things to note when measuring the sizes of kendo gears. First, soft sewing measuring equipment should be used. Since there are a lot of curves, there are people who use a metal measuring instrument. However, exact measurements can’t be done with metal. And during the measurement, do it in a group of two. Ask for help from people around you. Since measurement can’t be accurately taken by oneself, it should be done in a group of two. It is important to get assistance from someone else.

Head circumference size
Please note that at this point, your skin shouldn’t be pressed by the measuring equipment. Please refrain from measuring too loose. Consider the fact that a towel will be rolled up, so it is good to roll a towel when measuring.

Head width size
This is the line that passes through the forehead and temple, so it’s not that difficult. However, this part might need extra care depending on how the towel is rolled. So, measuring it loosely is also a good way.

Among the kendo protectors, the equipment used to protect the body is Do. This protects the abdomen up to the chest, and it is available in various colors and designs. Since embroidery and colors are used, it is the easiest protective gear that can show your originality.

Domune
Domune is a structure that covered the hard heartwood with cowhide. This can absorb strong damage. For Munekazari, there are great designs with embroidery too.

Munekazari
There are various patterns drawn on Domune. The patterns are called “Munekazari”. There are different kinds of decorative embroideries, and each has a different meaning.

Chichikawa
This is the hook for the string of the Do. The standard pattern is “cloud-type”. Cloud-type, from its name, is embroidery in cloud shape.

Not only as a design, but it also has a role of preventing the flow of the sword tip towards the neck, as it touches the chest. Previously, hitting the chest of a player in the top position was counted as a valid hit, so top players were often equipped with cloud-shaped protective gear. Even so, there are also other embroideries, so you can take a look at the designs and choose your preference. On online shopping websites, you can find Munekazari samples, and there is also a website that you can order based on the given samples.

Dodai
Dodai has the role of protecting the body from the shinai attack. It is usually made of chemical materials such as plastic and fiber, or bamboo. The ones made of chemical materials are available at affordable prices and are used for beginners and intermediate players. Generally, a bamboo Do has cowhide on the surface and is a lacquered finish. Aside from that, sharkskin is also used, and the type of finish has a wide variety. Generally, Dodai is black but other colors can also be used. Do is the easiest among the protective gear to show your individuality. Some people use showy colors while others make it look tidy with calm colors. Also, some schools match the colors to add a sense of unity.

What is the difference in materials?
Plastic Do is made of nylon, resin, etc. It has high durability and low price, so it was commonly used. Fiber Do is made by attaching high-purity pulp fiber base paper and hardening it with resin. It is lighter than plastic-made and it allows easier movement. It is general for traditional bamboo to attach the bamboo on cowhide, coat with lacquer, and complete. It looks luxurious and beautiful.

What is Do for beginners?
It is good to choose plastic, which is comparatively cheaper, or fiber, which is light and easy to move. You can choose whatever color you want, but the standard is black. Also, size is more important than the material or color. If you wear a set of protective gear that is not fit your body, your movements will be limited. So, please prioritize selecting something that fits your body.

Kote is a protective gear that protects hands up to the arms. This is exquisitely made to absorb damage while protecting the hands and it allows using shinai flexibly. Kote is usually comprised of Koteatama and Kotezutsu.

Koteatama
Koteatama is the part that protects the fist. Deerskin or composition leather is used as the material.

Koteatama is designed in a way that finger movements will not be interrupted, the decoration string is in several layers. So it is not stiff that you can’t move, but you can still flexibly open your hands. For the tip of Kote, only the thumb is in a separate form.

Tenouchi
On the grip part of Kote, Tenouchi, which is soft leather, is attached. For the inner leathers, deerskin and cowhide are used for high-end products while artificial leather is used for inexpensive products. Inner leather has a fine texture and is made to tightly grip the shinai. When used for a long time, chafe is visible due to friction with shinai. This is the most abused part, so this is also most prone to damage among the kendo gears.

Kotezutsu
Kotezutsu protects the wrist up to the middle part of the arms. A valid hit of Kote can be earned by hitting the Kotezutsu. Kote is a protective gear that the inner part tends to have heat and smell due to hand sweat. Therefore, it is important to completely dry the Kote after use.

This part prevents the waist or vital points from getting hit by shinai. Commonly, when targeting the waist, the waist can be hit mistakenly. With Tare, the shock can be absorbed, so the practice can be done safely.

Odare/Kodare
In Tare, there are three big Tare called “Odare” and two small Tare called “Kodare”. Emphasizing easy movement around the waist, it is made of cloth.

Name tag/Tare Name/Tare Zekken
On Odare, the center of the Tare, a name tag with the player’s name and the team is attached. A name tag font color should be in color navy or white, the team name should be at the upper part, written horizontally, and the player name should be below it, written vertically.

Tare’s Decoration
On Odare, there are cloud shape decorations too. Tare decoration is not only luxurious but also, by increasing the durability of Tare, it prevents it to lose its shape. Just like other protective gear, Tare also has a handmade type and sewing machine type. The handmade type has better workmanship compared to the sewing machine type, so it’s exterior is more beautiful.

How to choose Tare
When deciding on the size of the Tare, height, weight, and waist circumference should be considered. Tare is usually placed near the waist, so if the size doesn’t fit, the movement becomes dull. If possible, it is better to visit the protective gear shop and choose the one that fits your body.

Name can be embroidered on the protective gear, pouches, the name is usually embroidered on the pouch, and the uniform. The name is basic, but sometimes, embroideries are also added to celebrate the move-up. The basic shape is the same, so if you have your name on the gear, it is easy to recognize. With preferred embroidery designs, you can be more passionate during practices.

Where are the embroideries placed?
Embroideries are usually placed on Do, back part of Men Tare, back part of Tare, etc. For the uniform, it is usually placed on the chest, shoulder, apron part. And on the pants, it’s usually on the right hip and near the waistline. Embroider size on a uniform is usually height 3~4 cm, and for the protective gear, small sizes like 1~2cm are used.

What colors are available?
The color of embroideries are assorted, so you will be able to select your preferred color. There is no special regulation on the colors like gold, black, or white. Also, any font can be used

Cost
For the name, it varies per number of characters, but it’s usually around one hundred yen per character. For the embroideries, you can order online or purchase them in exclusive shops.

A set of protective gear are divided per part, and each has its role. There are various types so you might be confused at first. It is good to ask your coach or senior, but exclusive shops also recommend items that fit your level and age. It would be nice to ask for suggestions.