Let’s Learn about the Rule of the Match Simply! 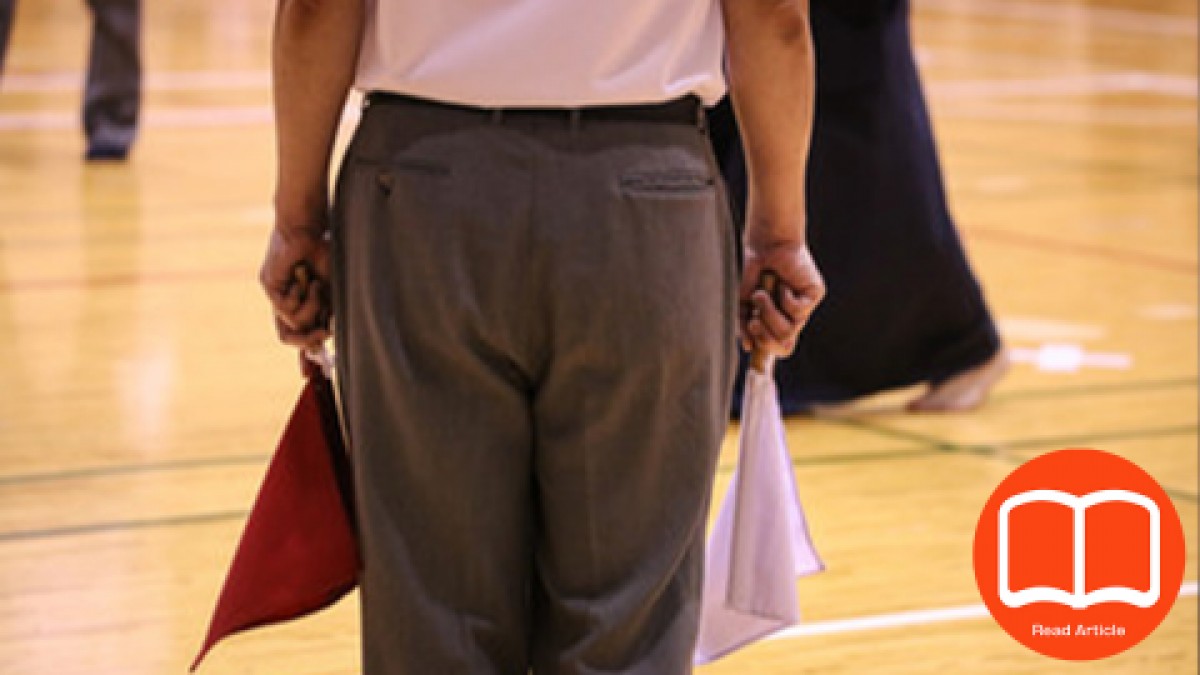 The rules that you need to know to face the match.

A match is a place where you show the result of your training.

You need to participate in the match, understanding the rules so that you can definitely show everything that you had been training zealously to date.

I’m going to write about the rules, including time, win or loss, and things you can’t do.

1.The Flow of the Match

The match happens inside the white line called "The playing field" which is made according to Kendo match rules.

The player winning two games first within the match time will win. Also, according to the match, there is an 「Ippon match」 where win or loss will be decided if one player wins an Ippon first rather than a three games match.

It’s a one on one battle on one playing field, whether it’s the individual or group match.

There is a case of the match going into overtime if the match doesn’t get decided within the time for individual matches that don’t have a draw.

When the time doesn’t stop

There is a time when the referee says "separate" if the shinai guard competition goes for a long time in the middle of the match, but the time doesn’t stop in this case. It may sound short when it’s two or three minutes, but you will have a strange sense of time feeling long and short when you are actually watching the match. However, it seems players in the match feel three minutes is quite long. If a player loses a point first in the second half, it is difficult to come back as the player is worried about the time left.

How to spend time could be one of the strategies.

3.Win or Loss in the Match

It’s important to get an Ippon, a valid strike, in winning a Kendo match, but it’s not always good to simply strike. Also, how the win or loss is determined in the individual match and team match is a bit different. I’m going to explain in detail.

Winning an Ippon in Kendo, a valid strike means "striking the strike area with shinai’s striking tip while holding the shinai blade properly with a faithful spirit and proper posture and being in the attacking position after striking."

To put it simply, you can win an Ippon when you shout out loud when attacking, strike with proper positioning of the shinai and posture, and do an attacking stance for the next fight straight away without relaxing after striking.

Therefore, you may not win an Ippon depending on the condition, even if you strike the strike area with a shinai.

Win or loss in the team match

Each individual’s win or loss will be accumulated, and the team who has the most wins in the end "wins: in the team match. There is a "draw" in the case of a team match. Also, if both teams have the same amount of wins, how many games the team has won (or lost) in the entire match becomes important.

You need to avoid losing two games because it significantly influences the win or loss later in the team match. Also, if the number of wins of matches and games is exactly the same, the winning team gets decided by the "battle of representatives" where each team sends their representative.

You have a sense of unity as each player’s win or loss can determine the team’s victory in the team match, and it’s especially the beauty of Kendo from elementary school students to university students.

There is basically no "draw" in the individual match. Therefore, if the match ends with a tie, the winner gets determined by going into overtime until the winner gets decided or by the referee’s judgment. The judgment is based on whether your strokes are close to a valid strike, Ippon, etc.

The referee consists of one chief referee and two assistant referees, and those three are in the court in a triangular shape. If two or three of them raise a flag acknowledging the valid strike, it’s an Ippon. If only one of them raises the flag, that strike is not valid.

There are cases where Ippon doesn’t get counted even if you had hit the opponent’s strike area when you don’t have "Zanshin," a posture and mind of not being inattentive after striking.

It will be judged as a "draw" in the case where both players weren’t able to do the valid strike and become 「zero」 within the match time, or both players each had an Ippon.

The match goes into "overtime" if the winner is not decided. Basically, there are many cases where the match continues until one of the players does the valid strike in the individual match, but it is also possible for a team match to go into overtime.

Also, there is a case where the winner gets decided by a "judgment" of the referee based on a standard of whose stroke was closer to the valid strike by setting aside time when the winner must be decided.

The main foul plays in the match are as below. If you do these fouls twice, the opponent gets an Ippon. There are mainly two foul plays that are "ones that are obvious" which is easy to understand, and "technical ones."

Ones that are obvious

It’s common, especially for beginners or the lower grades elementary school students, to receive a "caution" which is an advance notice of a foul. There are many cases where players themselves don’t know why they are getting the caution, so it is necessary to be conscious of it.

People get proficient in managing the match when they become a high-grade player, and some people use 「time (break)」 as a strategy and wear their helmet again when each player can’t quite attack each other. However, it can be bad for the opponent as the match stops when you call for a break in the middle of the match meaninglessly. There are cases where you can get a "foul" depending on the match, so beginners should avoid it.

Apart from the above, depending on the type of competition, it can be a foul if "the length of helmet string" or "shinai’s length and weight".  They measure the shinai in the competition for middle school students and above) is not following the regulation. It can also be a foul, depending on your age, if you defend with an odd posture (for example, defending while raising the left fist high. It is also set as a rule in the High School Sports Federation and Middle School Sports Federation. It’s also necessary to be cautious with your equipment.

6.Things You Can’t Do Apart from Above

As mentioned in the foul summary above, there is a bit unique rule exclusively for Kendo, which is "you shouldn’t drop your shinai". It becomes a foul for just dropping the shinai from both hands because shinai is very important to the player.

It is related to the fact that the shinai is the sword. You will definitely lose the moment you drop the sword if it is a battle with real swords. Accordingly, you get a foul as dropping the shinai from both hands means the winner is decided.

The next most common thing is touching the shinai during the match, and it is also prohibited. It’s the same for your shinai and opponent’s shinai, and you will get a cut in your hand if you touch the shinai as it’s a real sword, as mentioned above.

It is regarded as an act of disrespect to the opponent in terms of playing Kendo fairly, and it becomes foul. What’s more unexpected is that the referee shouldn’t touch the shinai either.

Some people often grab shinai with the tip pointing down, so there is a rule that the referee needs to be cautious with shoes or grip・handle.

Shinai is that important. Also, unlike other sports, Kendo has an implicit rule that you don’t show your emotions at the front. It means you don’t speak, act, or pose impolitely against the opponent or the referee's decision.

It is about "feeling thankful as there is an opponent to play against" whether you win or lose. That is, you shouldn’t do performances starting from 「victory pose」 in the court even if you have won the match.

It means you are disrespecting the opponent if you do. Please be cautious not to lose yourself by getting excited.

We had briefly learned about the rule and fouls. How was it? It would be good to ask your teacher or seniors about things you need to take care of, and you are curious.

However, apart from the set rules, you need to participate in the match without forgetting about the manner of people around you.